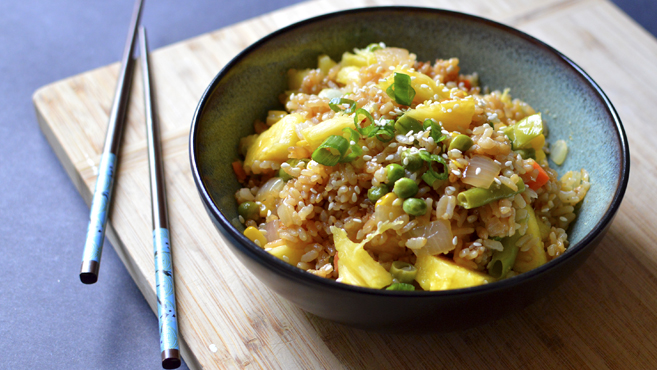 This sweet Asian-Hawaiian fusion dish was crazy-lazy easy to make. Dude, I was being so casual about it that I finished making the dish and took a bite before I remembered to add pineapple. I mean, like, DUH! I’ve often heard that fried rice is cooked best when using day old cold rice. With that in mind I bought one of those little “fully cooked” bowls of plan rice. I never bought one of those before. It’s youtube. All those broooos showing “what I eat in a day” or casual vlogs with food. I’ve seen some body builder chick use of one those pre-cooked rice packets (different brand). Another was vegan cheetah’s bruh use daiya brand cheese. These are 2 purchases that were subconsciously influenced by youtube. Fuckers. Making my life taster. So I think we pay 50 cents-$1 a lb for rice (I know aldi has even cheaper). Let’s compare that to my little precooked cup of rice cost $1.69 for 7.5 oz. Dude, more than $3 a lb. I really feel myself relaxing and not sweating the small stuff lately. It’s still a cheap delicious meal. I’d say this was a single serving. Feel free to double the recipe.

For more details on this recipe watch my video below. This was inspired by Vegan Huggs recipe.

These recipes are for cheap bastards and rich bitches like myself. If this social reject can master vegan, paleo, and non hippie dishes then all of you fancy pants can make these recipes with your eyes closed. These recipes are budget but bitchin’.